The glorious and stunning Hagia Sophia of Istanbul!

I have been twice and I would go again and again. The former church, mosque and now official museum has a saintly ambiance combined with Byzantine and Islamic architecture. Sitting in the old city part of Istanbul called Sultan Ahmet, it joins other nearby landmarks belonging to the UNESCO World heritage list for Turkey. 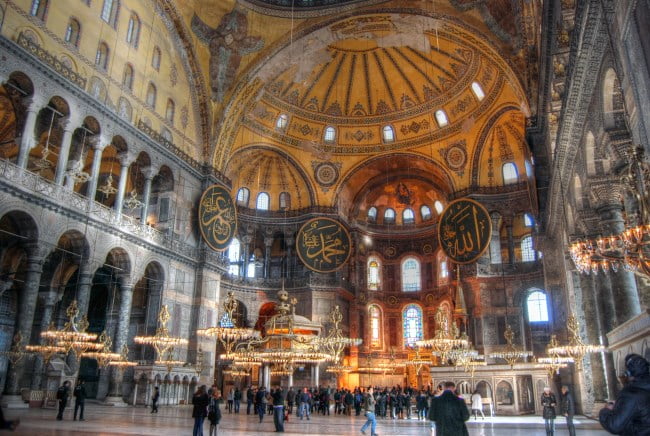 The large dome, Christian frescoes and Islamic calligraphy adorning plaques hanging from the upper galleries perfectly sums up the history of 3 cities; Istanbul, Constantinople and Byzantium. I cannot criticize the building in any manner and even the long queues to get in, do not defer me from singing its praises.

How is it possible that a manmade construction can evoke so much respect from me?

Well, its history is impressive but I urge visitors to head to the upper gallery and just stand there in silence for 5 minutes. As you do this, look around and take in the architecture. Imagine the people that crafted those walls, ceilings, and balustrades.

Despite being one of Turkey’s top visited attractions, the Hagia Sophia has a calm and quiet atmosphere. I think I can correctly assume that everyone who steps inside is likewise in awe.

One of the best descriptions I have read about it was penned by the author and poet Richard Tillinghast. In his book, an Armchair Traveller’s History of Istanbul, he wrote…

Once inside, I take off my hat. I am standing in a building that is a millennium and a half old. I want nothing to obstruct my vision, as I look up into the dome, which the ancients saw as being suspended from heaven on a golden train.

When Was the Hagia Sophia of Istanbul Built?

As a result, the Hagia Sophia was completely rebuilt in 415AD. It seemed however that its future was doomed because 117 years later, it was again destroyed in the Nika Riots of Istanbul. After being rebuilt, it suffered minor damage over hundreds of years but not enough to completely destroy it and we can see its fine glory in the building that stands today.

Interesting Facts about the Hagia Sophia of Istanbul

In winter, The Hagia Sophia of Istanbul is open every day from 09.00am to 5pm. Closing time extends to 7pm in the summer. On the first day of religious festivals in Turkey, it opens at 1pm.

Ticket booths shut one hour before though, so to enjoy your visit at a slow pace, arrive before then. Tickets at time of publishing are 30 Turkish lira for adults. Children under 12 go free.

The Hagia Sophia of…

Get the mobile app!

Our app has all your booking needs covered: Secure payment channels, easy 4-step booking process, and sleek user designs. What more could you ask for?